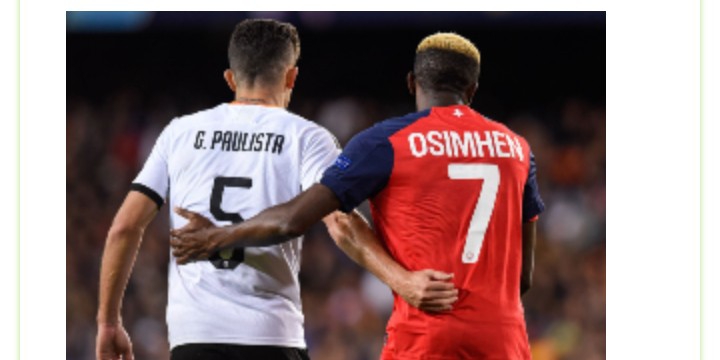 Nigeria international Victor Osimhen was on target in the Champions League on Tuesday night but could not prevent Lille from suffering a 4-1 defeat at the hands of Valencia at the Estadio Mestalla.
In the 25th minute, the ball deflected into the path of the Lille number 7 following a defensive error and he used his pace to get to the ball before Valencia duo Garay and Paulista, then scored after finding himself in a 1 on 1 situation with goalkeeper Jasper Cillessen.
Celebrated Spanish newspaper Mundo Deportivo were impressed with Osimhen's speed and likened him to the great Jamaican athlete Usain Bolt, who holds the 100m and 200m world records.
''Lille has advanced on the scoreboard (0-1) in his match on Tuesday of Group H of the Champions League against Valencia in Mestalla with a spectacular goal by Victor Osimhen.
''The young Nigerian striker, 20, has received a deflected ball and has not missed it. As if he were the very Jamaican exvelocist Usain Bolt , Osimhem, a footballer with a brutal stride, has started a spectacular race with the ball at his feet and has beaten, with a great precision Cillessen with a low shot that passed between the legs of the goalkeeper,'' the Barcelona-based sports daily wrote.
The Super Eagles star has now scored all but one of Lille's goals in this season's Champions League.
Igho Kingsley
Tweet